The Peltier effect is the presence of heating or cooling at an electrified junction of two different conductors and is named after French physicist Jean Charles Athanase Peltier, who discovered it in 1834. When a current is made to flow through a junction between two conductors A and B, heat may be generated (or removed) at the junction.
Thermoelectric cooling uses the Peltier effect to create a heat flux between the junction of two different types of materials. A Peltier cooler, heater, or thermoelectric heat pump is a solid-state active heat pump which transfers heat from one side of the device to the other, with consumption of electrical energy, depending on the direction of the current. Such an instrument is also called a Peltier device, Peltier heat pump, solid state refrigerator, or thermoelectric cooler (TEC). It can be used either for heating or for cooling, although in practice the main application is cooling. It can also be used as a temperature controller that either heats or cools.

A thermoelectric cooler (TEC), sometimes called a thermoelectric module or Peltier module, is a semiconductor-based electronic component that functions as a small heat pump. 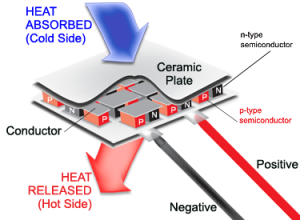 The Seebeck effect is the conversion of temperature differences directly into electricity and is named after the Baltic German physicist Thomas Johann Seebeck. Seebeck, in 1821, discovered that a compass needle would be deflected by a closed loop formed by two different metals joined in two places, with a temperature difference between the junctions. This was because the metals responded to the temperature difference in different ways, creating a current loop and a magnetic field. Seebeck did not recognize there was an electric current involved, so he called the phenomenon the thermomagnetic effect. Danish physicist Hans Christian Ørsted rectified the mistake and coined the term “thermoelectricity”.